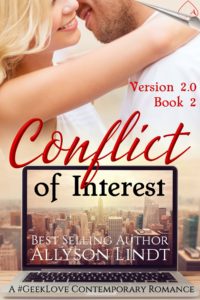 Kenzie propositions a sexy stranger in a coffee shop to prove to herself she’s capable of taking a risk. She doesn’t expect him to be sitting across from her the following Monday as her newest client. Even worse, she can’t stop thinking about what might have happened between them on a personal level if it weren’t for their professional relationship. He knows how to push her buttons, and she doesn’t want him to stop.

Scott has built his software company from the ground up to escape things like stuffy old men telling him how to behave, so he loathes his board of directors ordering him to make the public forget he doesn’t have a verbal filter. When his new publicity manager is the almost-fling he never expected to see again, he seizes the opportunity to have fun and still pretend he’s complying with the board’s edict.

Giving in to desire could mean both their jobs, but each “one last time” always leads to another. Now they have to decide what they’re willing to sacrifice to indulge this conflict of interest.