Get to Know Lisa M. Owens, and If Only 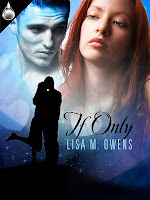 I’m delighted today to host the talented and passionate romance author Lisa M. Owens. Her novel If Only is about second chances, facing tough choices, and stepping into the unknown despite the risk. And because Lisa is a fantastic sport, she’s let me interview her today. I also have to mention Lisa has worked closely with domestic violence victims, and part of why she writes what she does is to raise awareness. That’s so incredible to me, so thank you for being that strong, Lisa.

Thanks so much for stopping by, Lisa. Because I know everyone is here to get to know you, let’s dive right in. Describe your ideal writing environment?
Lisa: Sitting on a towel with my laptop cradled in my lap on a stretch of white, sandy beach, listening to the melodic sound of waves crashing along the shore. Feeling the warm, gritty sand beneath my toes and the warmth of the sun on my face. Of course, if the sun was shining, I would need the shade of a palm tree above me, the fronds blowing in the slight breeze. That would be my ideal working environment.

In reality, it’s me sitting in a room all by myself, working. Sometimes with soft music humming from the speakers of my laptop.

That sounds so pleasant. I wouldn’t mind getting some writing done like that myself. But reality…

Speaking of gorgeous weather, Spring or fall?
Lisa: Fall. I love it when the colored leaves begin in rain down from the trees; the crunching of those leaves beneath my feet. The smells of green grass, dry leaves and sunshine that permeate the air. Kids in their Halloween costumes, the joy on their faces; even buying school supplies.

I love the sound of that, and you’ve painted a vivid picture *daydreams of fall*

Total change of pace now, what’s the biggest thing you’ve ever won?
Lisa: The biggest thing I ever won? I don’t know if you would really call this a win. While I was working on the Protective Order desk at the courthouse, I worked closely with Domestic Violence Intervention Services; helping people to fill out protective orders. One year, at one of their annual Candlelight Vigils, they presented me with a certificate for all of my hard work and my contributions to their organization. I still have that certificate and I am very proud of it. To me, that is the biggest and best thing that I have ever been presented with.

I now have two of those certificates but the first one I received is the one that I am most proud of.

That gives me chills. You definitely deserve to be proud of that, and thank you for being strong enough to do that kind of work.

What’s the craziest thing you’ve ever done?
Lisa: Craziest thing I have ever done? I am pleading the fifth on that one. Nothing illegal, just not anything I would want other people to know.

*laugh* Fair enough. They do say the internet is forever, so I can’t blame you for that.

What question do you always wish someone would ask (you or someone else) in an interview, but no one ever does?
Lisa: If your book was made into a movie, what actors/actresses would play the parts?

Oh, that’s a good one. I love seeing casting calls from authors, too. Hopefully we can have you back soon to answer that question, because now I’m curious.

How about you, readers? Any questions for Lisa?


And what’s If Only about? So glad you asked
What would you do if you had the opportunity to go back and relive your greatest mistake?

Five years ago, Bree Sexton walked out on her fiancé and into the arms of a charming and handsome stranger. She has regretted her decision ever since. Instead of a fairy-tale marriage, her “prince” shattered her dreams and her spirit with physical violence and emotional cruelty she barely escaped.

She then mysteriously wakes up in bed with the fiancé she loved and left, the life she’d dreamed of now a reality, until her cruel ex-husband reappears to destroy her new life. But what is real, and what is make-believe? Is she really getting the chance she has always dreamed of? And when it is all said and done, will she finally end up with the man she has always regretted leaving? Or will she wake up to discover herself alone?

Sounds intense and incredible, right? So make sure you check out more about Lisa here:
http://www.lmowens.com/
On Twitter: @_lisamowens
Facebook https://www.facebook.com/pages/Lisa-M-Owens-Author-Page/401065116637549
& Goodreads http://www.goodreads.com/author/show/6884569.Lisa_M_Owens

And because you know you want a copy of If Only, check it out here:
Liquid Silver Books
Amazon
B&N

Aside from the fact any hero named Scott must be sexy, I love this excerpt from If Only
Bree stood there for a minute, watching as he walked out of her life. She couldn’t help but wonder what would have happened if she had married Scott instead of Bryan. How would her life have been different? Would she have had children by now? Would she and Scott still be together, after all this time? Those thoughts and more weighed heavily on her mind as she headed out of the bar. It had begun to snow, and she wrapped her coat even tighter around her slender frame. She looked around, but there was no one to be found. She couldn’t help herself; she stuck out her tongue, a childish impulse she couldn’t ignore, and then laughed out loud in spite of herself.

She looked both ways before attempting to cross the street. Not seeing any cars, she began to make her way across. Bree was walking cautiously when one of her high heels slipped on a patch of ice. She could feel herself falling, and her breathing quickened as she began to panic, wishing she had waited for her friends before venturing off on her own. One shoe flew off as she landed, her head striking the curb. A sharp pain racked through the back of her skull, causing her to cry out. The last thing she saw was Scott’s face swimming before her eyes, and then her world went black.


Bree awoke to a man nipping gently on her earlobe, his tongue stroking the delicate curves. His hot breath blew into her ear, sending shivers up and down her spine. She slowly opened her eyes as a man’s hand stroked her upper thigh, and she sighed happily.

Ooh, I must be dreaming. And it was such a delicious dream, too.

The man’s hand traveled up her thigh and then encircled her flat stomach. Out of the corner of her eyes, Bree could see a dark head pressing against her abdomen. Then she shivered as a tongue laved her belly button, going in and out erotically, making her feel as though her body was on fire. Bryan had never made her feel like this, and she hadn’t even looked yet to see who this stranger was! But she was only dreaming, so what difference did it make?

His hand continued traveling north, lovingly caressing her skin. He reached for her aching breasts, pressing her nipples roughly before he lowered his mouth to suckle them, first one, and then the other. Bree arched in anxious response to his touch. She longed to see his face, but she feared one look would make his magical touch disappear.

She ached all over, wanted his hands to caress her everywhere, and she longed to touch him. She opened her legs as he straddled her. His hair brushed her naked chest as he began kissing her. His tongue was driving her crazy with desire as he placed tender kisses along her neckline. He brushed her hair aside.

His morning stubble stung her delicate skin, but she hungered for more. Just one more touch, just one more taste, and she would awaken from this wonderful dream and find herself in bed, all alone.

“Oh, Bree, baby. What you do to me,” he whispered, his voice husky.

That voice jerked her back to the present. The voice had haunted her dreams for

years. The voice of the man she just couldn’t seem to get over.

The talented author, Lisa Owens
The writing bug bit Lisa M. Owens at an early age; she was writing short stories and poetry by the age of seven. At the age of eight, she entered a writing contest at her elementary school. About fifty books were written, but Lisa was one of the thirteen writers chosen who received a certificate and the chance to meet Oklahoma writer Sandy Miller.

A former victim of domestic violence herself, Lisa worked at the courthouse for over seven years. Almost three of those years she worked on the Marriage License/Protective Order desk. She helped women file protective orders and worked closely with the staff and counselors at DVIS.

Frustrated with books that merely gloss over the subject of domestic violence, Lisa wanted to write a book that told the entire story. Her dream is for her words to help give someone the courage to leave an abusive relationship.

She resides in Oklahoma and has two children. This is her first published novel, and she is currently working on the next novel of her If Only series.

Lisa enjoys hearing from her readers and can be reached at P.O. Box 9643, Tulsa, OK 74157-0643, or by e-mail, lisamowens@ymail.com. She can also be contacted on her website, www.lmowens.com.