A Touch of the Crazies, Sneak Preview: Sofia Grey’s Obsession

In case you hadn’t heard, I’m a *huge* fan of the talented and brilliant Sofia Grey, and since her newest novel, Obsession (dark contemporary romance with a hint of paranormal, anyone?) is coming out tomorrow, I’m letting her hijack my blog for the day. 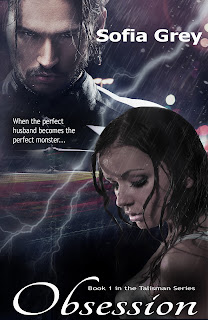 A Touch Of the Crazies

Tomorrow sees the launch of my latest novel, Obsession, the first in the Talisman series. It’s fair to say that for the past few months, I have been obsessed with Obsession. Writing took place a long time ago, more recently it’s been about editing, cover art, more editing, marketing, even more editing and scheduling the launch. But it’s finally here. It feels a bit like Christmas Eve. The anticipation. The promise of excitement tomorrow. Hoping everything is set up and in place.

I have a day job too and I juggle writing around that, grabbing whatever time I can get. Yesterday, as I dashed outside to buy some lunch, my mind was elsewhere, busy planning which excerpts from Obsession to use in my blog posts. Miles away, I rode down the escalator into the nearby food court and noticed the man riding up to the street level. I had to do a double take. Then another. He was the image of Josh Delaney, one of the lead characters in Obsession, and the guy I’d just been writing a blog post about. I should explain at this point that I not only have a mental image of how he looks, I have a picture on my Pinterest board. I capture all my leading characters there, and some secondaries, and this was an image I had looked at many times. 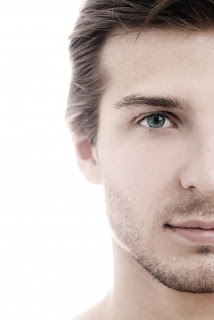 I was speechless. Stunned. I stared. He saw me. I blushed and stared some more. He smirked. You can imagine how it went. A total stranger eyeing him up on a busy escalator. To make it even more bizarre, when you read Obsession you’ll see just how weird this is. Suki, the female lead, has a scene where she believes she hallucinated him and for a crazy moment I wondered if I had too.

So there we go, my crazy moment from yesterday 🙂

To give you a taste, here’s the scene I’m talking about. Suki, upset from a row with Gabe, is dozing in her friend’s sunny garden and dreaming about a handsome man she met a few days ago.

I had to be dreaming. The guy from the café had materialized in front of me—a hundred miles from home—holding his arms out to me.

“Come here.” His voice was soft and tender, as though we were lovers. Hiccupping through my tears, I lurched into his embrace, resting my head against his chest. Instantly, my headache vanished. I sighed in relief. I wanted this dream more often.

“You okay now?” One of his hands draped against my hip, the other caressed my hair, the fingers soothing against the back of my neck.

“Yes. Now that you’re here.” I sighed again as I nestled against him, my eyelids drooping, heavy and tired. I had to speak to him before I lost the dream again. “Please don’t go.”

When I finally opened my eyes, I could hear voices in the distance. Crap, how long had I been asleep? I rubbed my eyes, yawning, remembering the dream and realising my headache had gone. In the dream, he took it away. It had been so real. I’d felt the softness of his shirt beneath my fingertips, smelled his aftershave. I would swear it’d happened, but how could it?

And even if, by the miracle of coincidence, he’d really been here, there’s no way I’d ever snuggle up to a complete stranger. And he hadn’t seemed surprised either. The whole episode had the heavy, unreal quality of a dream.

I ran a hand though my hair as I gathered my thoughts, and tried to squash down the fear. I’d wondered if last night with Gabe was just a bad dream. Now this. My reality was merging with my dream world. How long did I have left before they blurred into one? The descent into full-blown psychosis had just taken another step forward.

His charm and model good looks would be enough for most women, but coupled with his psychic ability to read their thoughts, he’s impossible to resist. Suspicious husbands employ him to test their wives, to see if they can be tempted to stray.

High profile couple Suki and Gabe Bridgewater have the perfect marriage, or at least, that’s the image they portray to the world. Behind closed doors, Gabe’s dominance in the marriage is unravelling and he decides to test Suki, using Josh as bait.

For Josh it should be just another easy job, but two things go horribly wrong.

One, Josh falls in love with Suki.

And two, Gabe refuses to let her go.

And since you’re hooked now (because how couldn’t you be?) You can find Obession here:
Amazon Kindle
Amazon Print
B&N
All Romance

And just to seal the deal, check out the trailer for Obession, as well

Blog tours are fun to take part in, these are my stops:

Romance author Sofia Grey spends her days managing projects in the corporate world and her nights hanging out with wolf shifters and alpha males. She devours pretty much anything in the fiction line, but she prefers her romances to be hot, and her heroes to have hidden depths. When writing, she enjoys peeling back the layers to expose her characters’ flaws and alwaysmakes them work hard for their happy endings.
Find her at: www.sofiagrey.com and on Pinterest: http://pinterest.com/sofiagrey1, or on Twitter @SofiaGreyAuthor
* images courtesy of 123rf.com