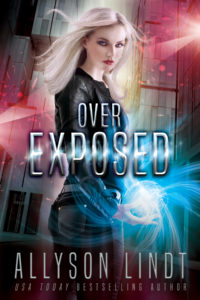 Over Exposed is coming in 2020

A hacker whose mind can’t be read is the hottest commodity on the market… and as good as dead.

Max and Taylor have spent the last decade running.

From the people who killed their families. From an organization that wants to experiment on them… dead or alive. And from an epidemic that could drive Taylor mad and unleash his psychic abilities. As someone whose mind can’t be read, Max is his link to sanity. The closer they grow, the more they question if friendship is enough.

And even fugitives need to earn a living.

As one of the world’s most notorious hacker teams, Max and Taylor burrow their way in to digital closets to find the darkest secrets of their powerful targets, and expose them for all to see. The biggest drawback—a list of ruthless enemies who want to see them crash and burn. Literally, if possible.

And now, they face their greatest danger—exposure.

Someone knows who they are, and is threatening to expose their secret. If they can’t stop their unknown assailant and hide their tracks, staying alive may be the least of their concerns. Staying sane may be impossible, and falling in love may be the most dangerous thing they do.