The Hatter and the Hare 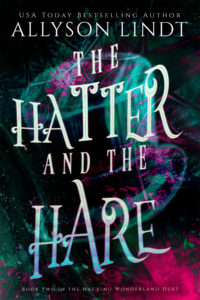 Purchase the Hatter and the Hare

Hatter has made a career of keeping people at arm’s length. He doesn’t expect Reagan to throw a wrench in his plans, though. Intoxicating, brilliant, and incredible in bed, she’s knocked him off-kilter in a way he never expected.

Hare has been called a lot of names in his time—fanatical, mad, and obsessive are at the top of the list. But he’s so close to getting what he wants. No one stands in his way, until Reagan. Her view of the world is an odd blend of rose-colored cynicism, and the things she lets him—begs him to—do her body, haunt his dreams and darkest fantasies. But she could ruin his life if he doesn’t move the chess pieces right.

Both men will risk their livelihoods, connections, and power to have her, but only one will kill if he can’t.

Author’s Note: This book is part two of a duet. It does not stand alone. Book 1 is Reagan Through the Looking Glass.