Demons, angels, and the world’s largest search engine. Because what better way to keep tabs on humanity? 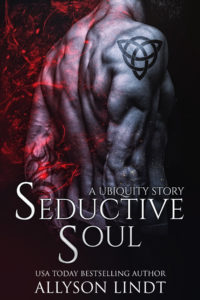 Ronnie’s not sure what to expect from demon orientation. Go experience the world is kind of a vague statement.

Then she meets her guide for the weekend. Irdu is a sexy incubus who’s up for anything she can imagine, makes incredible crepes, and does things with his tongue she didn’t think were possible.

Two full days of cotton candy, roller coasters, and a whole lot of time between the sheets has to come to an end sometime.

When Ronnie realizes Irdu’s been keeping secrets, it puts a hard stop on their fun. If she can’t reconcile who he is with her plans for the future, an incredible connection will be severed before they have a chance to explore what they could be.

Author’s Note: Seductive Soul is a high-heat paranormal prequel to the Ubiquity series, featuring a possessive incubus, a hint of mfm loving, and delicious alternate uses for chocolate sauce. 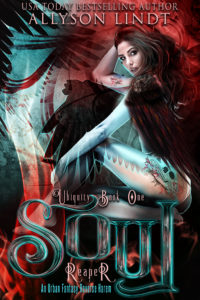 Officially she’s a retrieval analyst for hell. But the demons and angels who would sell their souls for her job know what she really does for a living. She fetches lost cherubs, and gets to enjoy all the perks of life on earth in the process.

She might appreciate the position a little more if: a) she could remember anything about her life before she started working at Ubiquity, b) the damned voice in her head would just shut up already, and c) her boss weren’t a complete control freak.

On top of that, her favorite incubus-with-benefits is acting super possessive. Her mentor, Lucifer, is being more cryptic than normal. And the two most powerful angels in history are there whenever she turns around—Gabriel seducing her, and Michael pushing her away.

Ronnie’s struggling to keep her sanity and job, while stopping the voice in her head from stealing her life. The last thing she needs is the complication of falling for an angel… or an entire harem of heavenly and demonic hosts.

Publisher’s Note: Soul Reaper was previously released as Uriel’s Descent. It has been edited and revised for this re-release. 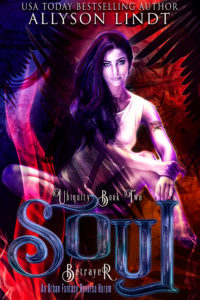 Lucky for her, she has still has Irdu… And the ultimate promotion—an executive position at Ubiquity. As the public face of the world’s largest search engine, she’s got plenty to keep her busy.

When the SEC comes knocking, because Lucifer did a poor job of hiding how heaven and hell funded a global corporation, Ronnie’s problems are just starting. Angels and demons are vanishing, and no one knows why. Oh, and there’s the matter of someone with other-worldly power, destroying buildings and city blocks from Boston to Moscow, then posting the videos online.

The chaos tears her from Irdu.

The questions it raises lead her to Michael and revelations about his involvement she’s not prepared to face. Her time to decide who she can trust is running out. If she doesn’t find her answers in time, heaven and hell will be exposed to the world, and humanity will pay the price.

Author’s Note: This book was previously released as Uriel’s Betrayal, and has been edited and revised for this re-release.

Ronnie doesn’t expect Gabriel to seek her out after hiding for so long. And she definitely doesn’t expect him to strip her of her power. That’s a thing? But it’s nothing compared to what he’s got planned next. A move that will shake the world to its core. Heaven, Hell, and Humanity will never be the same again.