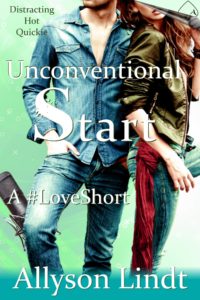 Author’s Note: Unconventional Fling was inspired by a short story I wrote ages ago. The book has changed a bit since this original inspiration, but if you’re looking for a quick, sexy read, enjoy this free short story.

Molly saw him across the lobby, and her heart dropped into her stomach. What was Brandon doing in Nashville? It didn’t matter. He wasn’t there for the anime convention. He was too normal for that. She turned away, black skirts swishing around her, and headed for a crowd waiting to get into a panel.

She raked her fingers through her blond wig, trying to keep it on straight. Pulling her program from her bag, she looked to see what she was waiting for. Opening ceremonies, of course. She didn’t want to be stuffed in a standing room only crowd for the next two hours. But she could sneak out when he was gone.

She tried to put him out of her head. Whatever he was doing in that hotel, she could avoid him for the weekend. It would be easy enough once she set up shop in the dealer’s room. She’d spend most of her time there. An errant hand brushed her thigh through her flimsy skirt and she growled.

The guy next to her turned away quickly, cheeks flushed. “Sorry.”

The touch lingered on her skin, summoning more memories she didn’t want. That single night spent with Brandon. The intensity, the passion, the way they clicked…she shoved it all aside, reminding herself she wasn’t doing relationships anymore. They screwed with her head and they made it hard to focus when she was working. Besides, spending half her time on the road, following conventions, she didn’t have time for that kind of crap anyway.

Once inside, she stood toward the back of the room. Not like she had much of a choice, but she preferred it that way anyway. A few moments later the doors closed and the lights dimmed. A roar of applause tore through the room as the opening show started and the para-para dancers filled the stage. Strobes and loud music drowned out everything else as the costumed dancers moved in sync to Japanese music.

She couldn’t help her smile, and was glad he couldn’t see her reaction in the dark. Her heart hammered faster than the beat of the music, throbbing against her ribcage. She said, “Thanks,” but didn’t know if he heard it.

Two hands found her hips, palms brushing her bare back. His chin rested on her shoulder, breath warm on her neck. “You’re a hard woman to track down.”

She didn’t know how to respond. Didn’t even know if it would matter. He wouldn’t hear her over the music and the cheering unless she raised her voice or turned around.

His thumbs ran over her sides. “I was just glad there were so many of you here they weren’t checking convention badges.”

She leaned back against him, sighing at the feeling of his T-shirt against her back. Damn it she didn’t want to be enjoying this. She needed to walk away. No relationships. Love sucked.

His lips brushed her neck, hands sliding lower and brushing the sheer fabric barely hiding her thighs. “I know what you said in Chicago, but I’ll be honest, I didn’t really agree.”

She thought she nodded, she wasn’t sure. Fire raced over every inch of her skin, tingling where he touched. The need grew between her legs and she squirmed.

One of his hands dipped between the folds in her skirt, touching bare skin and running along the elastic of her panties. The other moved up her stomach, brushing the bottom of her tit. “I’m going to hope you don’t mind.”

Holy shit, what if someone saw what he was doing? The rush added to her need, and she kept her gaze pointed forward, not wanting to know the answer. She leaned into him further in response, feeling his arousal pressing against her ass.

“Delicious.” He sucked on her neck.

His fingers massaged her through panties, and she tried to be subtle about grinding against him. He brushed her nipple through the fabric of her dress and she gasped. His other hand pushed the crotch of her underwear aside, dipping between her wet folds.

Her whimper was lost in the noise. She thrust her hips against him, biting on her lip to keep from making too much sound. His fingers found her clit, rubbing circles around the swollen nub. The combination of his touch and the terrifying thrill of being felt up in public pushed her toward climax quickly, and she bit back her moans as she came, grinding against his hand.

She rested her fingers over his when the pressure became too much. Pulling his hand from her waist, she raised it to her lips. She sucked each digit clean, running her tongue over the pads and fingertips. His teeth dug softly into her shoulder, and she smiled.

Something cold brushed her chest, and she realized he was sliding something small and plastic into the top of her dress. A room key?

If you enjoyed this super-short sexy read, make sure to check out the book it inspired. Unconventional Fling is available August 18, 2016, and you can purchase it here: http://amzn.to/29nfQSj