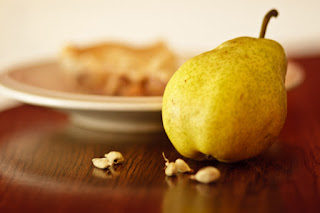 When Vanessa told me her heroine in Ripped Awake not only owned a diner, but made a wicked famous pear and cardamon pie, I knew I had to have the recipe…And read the short story.

She shared with me, and both are definitely worth it. But I can’t give you too much good stuff at once 😉 So today you get the recipe (it’s a gorgeous spring Sunday here, perfect for baking something like this), and tomorrow you can pick up the Under a Moonlit Night short story collection that contains Ripped Awake and shorts by three other authors as talented (but maybe not as amazing a baker) as Vanessa.

And since Lacy is here to share her famous pie recipe, I’m going to leave the next few paragraphs up to her.

One of the advantages of being the owner of Lacey’s Place is getting to try out all kinds of new pie recipes. You see, we’re famous for our pies, many of which are heirloom recipes left to me by my Gran, but sometimes customers want to try something new, and as the proprietor, I’d kinda prefer they not seek their something new someplace else. So, we try new things.

When Rip woke from hibernation, he had a lot of free time on his hands, so I had him help in the kitchen. It turns out he has an uncanny knack for pairing unexpected flavors–flavors he had never even heard of in 1911. This recipe he came up with was so popular, we added it to the regular menu. It tastes fantastic with vanilla ice cream and a cup of coffee.

A note on crusts: pie crust is kind of a personal thing. Some folks like an all butter crust, some prefer one with lard or shortening. Use your favorite pie crust recipe, or even buy pre-made crusts at the store. I won’t judge. 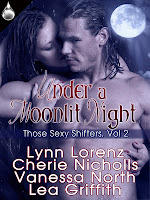 Want to know more about Lacey and Rip?
Four authors. Four short stories. Four explosive reads filled with hot alpha males and the women, or men, who love them. From family secrets and mysterious strangers to passion unleashed these hot, sexy couples struggle to overcome the odds and find love everlasting! This short story collection will become a treasured addition to your romance library.

And just who is this brilliant mind, Vanesssa North, who came up with this great short, and the snacks to go with it?
Vanessa North was born in New England but moved to the South as a teenager, where she learned to appreciate biscuits and gravy, bluegrass, and that most welcome of greetings: “Hey y’all!” She has a degree in Mass Communication but has long since abandoned journalism in favor of writing romance. Instead of telling the news, V would rather tell stories.

Vanessa has a voracious appetite for books and loves all kinds. She writes obsessively: every day brings new ideas and stories to tell. When she’s not buried in a book—hers or someone else’s—you can find her taking thousands of photographs of the people she loves.

She lives in Northwest Georgia with her handsome husband, not-quite-civilized twin boy-children, and a very, very large dog.