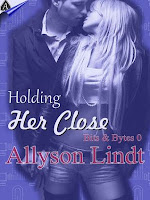 When I was six, I decided I wanted to write stories when I grew up. When I was ten or eleven, I wanted to be an astronaut. I had always been told I could be whatever I wanted, because I was bright and ambitious. So I was going to go to space camp. And then the next year I was going to be a defense attorney. I would put all the bad guys behind bars.

Or maybe, as I decided a few years later, I would be a celebrity photographer, and everyone would know my name because I would be the person who took that photo of /*Insert Celebrity Name Here*/ on the cover of Rolling Stone. If you’ve never looked into what it takes to be that kind of photographer… It’s on par with being a querying author hoping to make that 7 figure advance with your debut.

In Holding Her Close, Zach and Scott were living their dream. Running the software company they’d built from the ground up. Until Zach’s ex-girlfriend sold them out and cost them the entire deal in a hostile takeover. Everyone reacts differently to having their dreams snatched away, and these two best friends aren’t seeing eye-to-eye on the best way to cope.

Even if Zach hadn’t heard everything Scott had said, he’d be able to guess. The conversation hadn’t changed much since they’d lost Cord in the hostile takeover nine months ago.

Scott nodded at something behind Zach “Was she as good in bed as she was attractive?”

Was she? Fantasy sideswiped Zach’s thoughts and slid in to take their place. Rae’s teasing laughter growing heavy as he backed her against a wall, peeling off her thin top, making her gasp. He pushed the images away again. Where the hell had that come from? And that wasn’t what Scott was talking about. “Who?”

Scott raised an eyebrow. “Whoever you liked enough to let spend the night.” He nodded at the sink again. “Extra mug?”

Right, that. Zach shook his head, as much to force the tantalizing images out as to answer Scott. “No one spent the night.”

“Fine, don’t tell me. Whatever has you distracted must have been the best fucking wet dream in history. You liked her enough to make her coffee this morning.” Scott turned back to the letter in front of him. “This changes everything, you know.”

The rapid change of subject didn’t faze Zach. They were talking about the letter again. He exhaled slowly. “The only thing that’s changed is it’s in writing now.” It was a formal copy of the offer Digital Media — the company who had “acquired” Cord — was making to buy Zach and Scott out of their old company shares. “That doesn’t make getting out of it any easier. In fact, it makes it that much more real.”

Scott pushed off the barstool, and paced the length of the kitchen. “So what do we do?”

The specifics had varied over the past few months, but the meaning of the conversation never changed. Scott refused to accept that they didn’t have any options, and got pissed when Zach had the nerve to point it out.

Zach was sick of it. He hated the entire thing as much as anyone — they had built Cord together — but he had also accepted reality months ago. “I was thinking of bumming around Europe for a couple of years. Sell the house, put the Porsche in storage, and buy a stack of traveler’s checks and a one-way-ticket.

“This isn’t a joke.” Scott’s snarl echoed off stone and stainless steel.

Zach knew what was coming next. Or at least, he had a list to pick from and he’d narrowed it down to the most likely option. This would probably be the negotiation argument. Couldn’t they just stay on long enough to launch their current game? DM would have to let them stay if they did a great job. They just had to prove they could play nice with their new owner. Like trained dogs on a leash.

Scott stopped and turned to face him, dark eyes narrowed.

Or maybe it would be the “Can we just pretend we never saw this?” argument. That one was always amusing.

“Is this what you wanted?” Scott asked.

Zach choked on a canned response. That was new. “Excuse me?”

Scott shoved his hands in his pockets. “This isn’t just our lifeblood, it’s our dream. It’s being ripped away, and you’ve barely batted an eye. Do you have any idea how sick I am of hearing ‘there’s nothing we can do’ over and over again?”

There have been times when I’ve thought about giving up my dream of writing, but I always get sucked back in. Never give up, never surrender, right?

What dreams have you had/do you have that grab you by the lapels and refuse to let go? Tell me in the comments below, and be entered in a drawing to win a copy of Holding Her Close.