I’m taking a break from my reverse blog tour today to make an announcement. I don’t have all sorts of tidbits of anything to draw this out, so I’m going to dive right in.

The release of my debut novel, Conflict of Interest has been an insane and awesome ride. I had no idea what to expect, and less than a month into it, I’m still not sure, but I do know it’s been fantastic so far.

Amazing enough, I’m already doing it again. Over the next few months I have two more books coming in the same series.

The first, Holding Her Close will be available July 1. I’m doing things a little differently than those wacky ‘normal’ people who are smart enough to release their books in order. This will be Book 0 in the series – a ‘where it all began’ prequel. For those of you who have read Conflict of Interest, this is the story of how Zach, Rae, and Scott got started on this crazy journey.

Next up, coming August 19, Liquid Silver Books is releasing Toeing the Line, Bits & Bytes Book 2. Featuring Kenzie’s nothing-like-her twin sister, Riley and her best friend, Zane. If you want just a little more taste of what it’s about:

His time in the Air Force doing electronic surveillance has taught him a thing or two about keeping secrets. But when his best friend finds out what kind of secrets he’s kept from her, their ‘with benefits’ relationship won’t be what threatens their growing feelings for each other.

I’m so excited to share both of these books with everyone. Like Conflict of Interest, they both feature characters who have lived in my head for much longer than characters should without a story, and I’m thrilled to get them out there.

Oh, right! I promised y’all a cover reveal ^_~ Below are the cover and excerpt for Holding Her Close 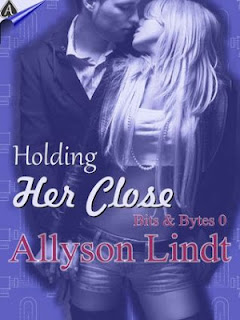 When heartbreak and betrayal define a billionaire playboy’s past, the last thing he needs is to fall for the one woman who can save his company. See how it all started in the prequel to Allyson Lindt’s Bits & Bytes series. Holding Her Close is a sexy, contemporary romance about first loves and second chances.

Zach is haunted by ex-girlfriends. The day his fiancée dumped him she also sold her shares of his multi-billion dollar corporation. On top of that, that girl who broke his heart in high school – the only woman he’s never been able to forget – is back in his life. She’s filling his business partner’s head with delusions of recovering from the hostile takeover, and haunting his most vivid fantasies. But he’s got a plan to solve half the problem: one night together and they can put the past behind them.

It’s been more than ten years since Rae talked to her high school sweetheart. But running in the same circles –her best friend is his business partner – has caught up to her. Rae is seeing Zach everywhere, including her explicit, rampant imagination. When he proposes a single night together for closure, she hopes it will be just what she needs to move on.

The past and the present intertwine as “Just this once” becomes “Just one more time.” Especially when Rae discovers the solution to Zach’s business problems. Can he trust her enough to risk his heart and livelihood a second time, or will experience convince him to walk away from everything?

Add it on Goodreads